Changing gender norms at scale: Results and evidence of what works from Voices for Change in Nigeria

Recently, there’s been an increasing interest in the role of social norms in shaping people’s aspirations and promoting – or limiting – equitable development.  We’re all aware of how we are influenced by our peers, that sometimes we do things so we are accepted by a group that’s important to us.  But just how we can build on this human need to belong to promote equitable and inclusive development is hard to know, and evidence to guide such efforts is patchy.

Over the past five years, Itad has been working with Nigerian colleagues brought together by Palladium, WRAPA and Social Development Direct on the DFID-supported programme Voices for Change (V4C). Working across four Nigerian States (Enugu and Lagos in the Christian south and Kaduna and Kano in the Muslim north) and using a social norms approach, V4C aimed to catalyse support amongst young women and men for greater gender equality. The programme was known for its innovative approach, promoting change simultaneously at three levels – amongst individuals, in wider society, and informal institutions such as government legislation and policy, and political structures.

Young people were invited to join intensive ‘safe space’ dialogues either in person, in their colleges, or online. Transformative gender awareness training was provided for influencers in young people’s lives, such as media personalities and religious and traditional leaders, to enable them to promote positive gender behaviours. To promote societal change, and create the space for young people to adopt more equal gender behaviours, the programme ran ‘Purple’, a branded mass media campaign across radio, TV and social media, to make gender equality the new cool. Finally, to strengthen institutional commitments to gender equality, the programme supported Nigerian gender advocates to push for legislation to enshrine equal opportunities in law and prohibit the use of violence, to give greater focus to committing budget resources to promote gender equality and assisted women to get more involved in politics.

So, after four years of implementation – and lots of learning along the way – what did the programme achieve? Was the programme successful in inspiring young women and men to adopt more equal gender behaviours in their own lives and encourage their peers to do the same?

Throughout the programme we invested in strong monitoring and evaluation systems, including a longitudinal population representative panel survey (aka good hard quant data!), to measure changes in young people’s gender attitudes and behaviours and shifts in social norms, and to draw out learning about what works (and what doesn’t!).

During the four-year life of V4C, there was large-scale change in young people’s gender attitudes in the four states.  A total of 89% of Nigerian young people in the four States (2.4 million people) improved their attitudes and behaviours in at least one of three areas behavioural areas: women’s decision-making, women’s leadership and violence against women and girls. It is hard to specify exactly the contribution V4C made to these large-scale changes but there is good evidence that Purple played a major role.  Almost 48% of young people in the four states (that’s 1.14 million people) recognised Purple and over 70% of them correctly identified the brand as being associated with gender equality.  These ‘Purple people’ experienced greater levels of change in their gender attitudes and practices than young people who did not recognise Purple in most of the areas that we tracked.  For example, ‘Purple people’ thought more about gender issues than ‘non-Purple people’, they believed more strongly that women’s opinions matter in decision-making were more supportive of women’s leaders and were more likely to speak out against violence against women and girls.

“Purple changed me a lot; it changed my perspective especially, about what I wanted to pursue in life. Before now, I was literally that kind of person that just wants to go to school, get a career [degree] and end up marrying…But now I want more because I get to know that I can do more and I can do what a man can do. Now I can actually run for president I actually want to come out for SUG [student council] president…”

Attitudes and behaviours towards violence against women and girls

We did, of course, want to know not only what V4C was achieving but also how it was making change happen.  These insights were often generated through our qualitative studies, particularly a rapid study on ‘how change happens’, which complemented evidence generated through the panel survey.  Through this combined evidence, we found that V4C’s intensive personal change interventions, like the safe spaces with young men and women, were successful in bringing about much higher levels of positive change in young people’s gender attitudes and behaviours, especially amongst men, than found amongst ‘non-Purple people’.  But the effect of these interventions is much greater as the evidence shows they have catalysed ‘agents of change’, young people who started to role model or champion more equal gender attitudes and behaviours, diffusing them to their peers. Many of these young people have had profound effects on others, with the latter reporting high levels of attitude and behaviour change as well, sometimes even larger than the changes reported by young people directly involved in V4C personal change interventions.

We also found that the Purple brand had lent coherence to the mass media campaign, connecting otherwise disparate communications channels, and giving a sense of wider societal support for change. This helped create the space for individuals to adopt more equal gender attitudes and behaviours, and, by creating synergies between interventions, raising the scale at which attitude and behaviour change took place.  Synergies between interventions were important for another reason: the evidence shows that the greater a young person’s exposure to Purple, the larger the change in attitudes and behaviours they generally achieved 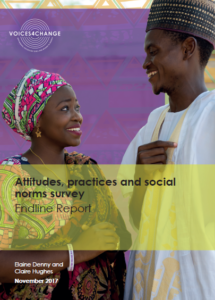 V4C has generated many more insights into what works, and what doesn’t, in promoting gender equality through a social norms approach. There are findings on the effectiveness and challenges of promoting change in the online space, the relative effectiveness of different media forms and ways of reaching poorer sections of society.  To find out more, read our two new publications: