Eyes on a prize for climate information services

The UK Aid-funded Ideas to Impact programme, which is managed by an IMC Worldwide-led consortium, has just launched our evaluation report of the Climate Information Prize (CIP).

The CIP is one of the innovation inducement prizes that Ideas to Impact designed and ran to incentivise solutions to development challenges related to energy access, climate change adaptation and water and sanitation in Africa and South Asia. Specifically, the CIP aimed to encourage participating organisations in Kenya to develop and implement climate information services (CISs) that disseminated meteorological data and farming advice in formats that smallholder farmers could access, understand and use.

The CIP evaluation is one of a series of Itad evaluations of the Ideas to Impact prizes, asking: Are innovation prizes useful for development? Here, we share some reflections on our findings about what worked well and what worked less well.

The prize engaged people who were:

18 organisations – including non-governmental organisations, community-based organisations (CBOs) and private sector enterprises – made eligible submissions at the end of the prize. Of these, seven (first to fourth place and three runners-up) were awarded a total of $505,000 to use as they wished.

We found some promising outcomes: 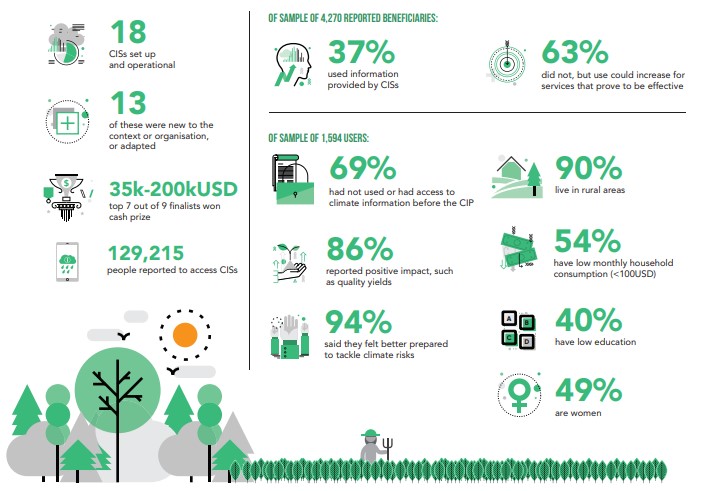 Figure: Headline outcomes for the CIP (Source: Stott and Brown, 2019)

But identified some limitations.

Ideas to Impact is interested in understanding the limitations of prizes, as well as what they are good for. We found that:

The structure of the Ideas to Impact programme provided us a unique opportunity to return to Kenya to understand what participants were doing a year on from submitting their final reports. We found that 15 of the 18 final participants are still delivering their CISs. Those who won an award have reinvested their winnings in their work.

Several prize winners have focused on refining their service and plan to scale it out to reach more people in more counties, once they have achieved a standard that they are happy with. Those who did not win a prize still see value in delivering their CIS and strive to continue, though for many, resourcing remains an issue. A couple of participants have scaled down their service since the prize finished, to keep it going.

The recognition participants gained from the prize has enabled many participants to make connections to support their work, but it has not unlocked additional financial resources. Instead their CISs rely on individuals’ continued drive and motivation.

The findings of the main evaluation are detailed and discussed in the main CIP evaluation report. Findings from the sustainability assessment are emerging, and the report will be launched towards the end of this year with further detail of what has been happening since the prize closed.