What I learned at the CARES realist evaluation conference

A couple of weeks ago I attended the CARES realist evaluation conference at the Barbican Centre in London. It was a brilliant few days of reflection and debate about all things realist, and a great chance to discuss Itad’s first realist evaluation (of the Building Capacity to Use Evidence programme, or BCURE) with the wider community.  Here’s some of what I learned…

Realist evaluation is here to stay (and has a lot to offer the international development field). Gill Westhorp informed us that ‘Pawson’ and ‘realist evaluation’ were the most frequently referenced terms in the journal Evaluation last year.  At this year’s European Evaluation Society conference, there were 18 hours of discussion on realist evaluation across 6 sessions (for comparison, there were 7 sessions on QCA as my colleague Florian wrote about recently, and just one on contribution analysis). Sara Van Belle argued that realist evaluation comes in the slipstream of a widespread acceptance of theory based approaches in international development evaluation, welcomed by commissioners who are aware that they are trying to implement projects in complex settings to address ‘wicked problems.’ Our experience from the BCURE project is that realist evaluation provides a systematic way to examine how context affects how people respond to the resources provided by programmes in a complex environment, and how this influences programme outcomes (we wrote about this in a CDI practice paper last year).

Ray Pawson presented a fascinating new argument against RCTs as a ‘gold standard.’ He argued that pharmaceutical drug trial RCTs (the ultimate ‘gold standard’ of RCTs) are only possible due to many years of previous basic science, which has developed, tested and refined theory about the drug’s mechanism of action.  By the time the RCT happens, there is already a very well developed theory about how and why it works, the appropriate dosage, the eligible patient sub-population most likely to respond…in other words, an idea about ‘what works for whom in what circumstances, in what respects and why.’ In contrast, Pawson argued that RCTs in social research are a ‘79-pound weakling’ – because they aren’t superseded by all this prior theory development and testing work.  Ray’s presentation was filmed and should be up on the conference website soon (and he’s also presenting in Oxford next month) – definitely worth a watch. 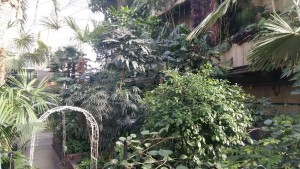 The Barbican Centre conservatory – a post-apocalyptic vision of abandoned city tower blocks, aka a great place to have a poster exhibition.

However, some presentations throughout the conference highlighted challenges with this. How should the evaluator choose which of the many thousands of theories across the social sciences to build on? How can the researcher avoid their evaluation being shaped by ‘serendipity’ – stumbling across theories that seem to fit by chance, or explaining the programme with reference to theories that they happen to be familiar with in their field?

Doing realist evaluation means ‘thinking like a realist.’ Realist evaluation is more than an approach, it’s a worldview and a way of thinking, grounded in a realist understanding of reality (as Gill explains concisely in her ODI methods paper). Thinking and collecting data in a ‘realist way’ presents many challenges…most are common across qualitative research, but show up in specific ways within realist evaluations.

Both Ana and Gill Westhorp talked about how the capacity building of international research teams was an integral part of their evaluations – building face to face meetings and capacity workshops into the budget, using ‘methods handbooks’ and similar tools, involving the international team in the theory development process, using webinars to introduce teams to the concepts of realist evaluation and realist interviews, providing lots of on-the-ground support, and ultimately using a variety of capacity building tools to get people to ‘think like realists’.

Overall, many things to chew over and consider how they can be brought into the realist evaluation work we are doing at Itad. It’s great to be part of such an active community of practice around realist evaluation, and very reassuring to know that others are grappling with the same issues as we are! Huge thanks to Justin Jagosh and the organising team for putting on a great event.

Next week, I’ll be blogging on challenges faced and lessons learned at the end of Year 2 of the BCURE evaluation.