Itad recently undertook the year 3 evaluation of the Pacific Women Shaping Pacific Development (‘Pacific Women’), a 10-year AU$ 320 million programme funded through Australian Aid, working in 14 member countries of the Pacific Island Forum. The programme operates through strategic partnerships and funding relationships that aim to improve the political, social and economic opportunities for women. The formative evaluation took place after approximately four years of implementation and was an independent assessment of whether Pacific Women achieved its first interim objective and to establish the extent to which the programme is tracking toward achieving its intended outcomes.

There are four outcomes for the project:

Interactions between WEE and VAWG 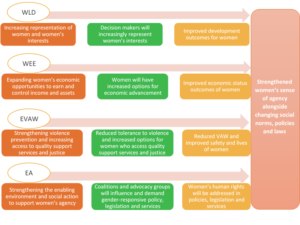 The overall approach for this evaluation applied a theory-driven evaluative process and so was based on a programme theory of change (please see fig 1 for simplified programme logic).  A key feature of Pacific Women’s theory of change embeds an assumption that something is to be gained from simultaneous work on all the outcomes. In other words, it is their co-existence which promises overall impacts; and therefore, they need to be activated alongside each other. The evaluation Interrogated and tested the theory of change, so as to understand and elaborate the causal pathways and assumptions. This process revealed a number of interactions between VAWG and WEE.

Evidence from the evaluation suggests that the programme is adopting a broader approach centred on the family as a vehicle for dealing with some of the root causes of violence.  In PNG, for example, it is dubbed ‘family and sexual violence’, and it seeks to ensure that other violence that is seen in families (such as incest, brothers or fathers beating up sisters and daughters, or even honour killings) do not fall through the cracks. Focus also includes changing attitudes on myths surrounding violence such as women thinking it is okay for their husbands, brothers and fathers to beat, rape and even murder them; or the very low status of women which results in a lack of interest from parents to make sure their daughters have opportunities; or women making excuses for the violence seen in the home, and blaming it on culture or alcohol and drugs.

This family approach is laudable and should tackle some of the interconnected issues of violence and economic empowerment of women. If women and girls are seen to have a better status, then there is a likelihood that parents, especially fathers, will invest more in their girl children and hence better opportunities in the future. It also sits well with the need to continuously document qualitative evidence that the programme inputs are indeed resulting in changes in people’s lives at community level. This is a necessary part of the evidence picture to be confident in the causal processes implied by the programme ToC.

Although violence against women is high in the Pacific and hence programme skewed towards EVAW, there was good consensus that the four intended outcomes of the ToC apply well to the Pacific contexts and, alongside gender mainstreaming, have good potential to generate change – especially when there are links between them. The evaluation recommended that there should be activities in all outcome areas in each country: this will maximise the potential for positive linkages – the co-existence of progress in all outcomes enabling women’s empowerment – to drive the overall impacts of the ToC.

[1] Pacific Women (2014): women make up just 4% of parliamentarians in the Pacific (the lowest rate in the world), compared to the global average of around 20%.

[2] – Ibid – men outnumber women in paid employment outside the agricultural sector by approximately two to one.

[3] DFAT(AusAID) 2012: violence against women in the Pacific is a high, with over 60% of women in some countries reporting experience of physical and/or sexual violence.