Why we joined the Global Climate Strike

On Friday 20th September, colleagues from across Itad walked out to join the Global Climate Strike in Brighton. Here, some of them reflect on why they decided to march.

“I joined the global climate strike to put pressure on policymakers to do more to protect our environment for future generations and to conserve our planet’s delicate ecosystem. To quote Ami Vitale: ‘when we see ourselves as part of nature, we understand that saving nature is really about saving ourselves.'” Faith Nikobari, Project Administrator

“I attended the strike on Friday because we need to raise awareness of the emergency that we are in. Tipping points of climatic change are already happening and we are at real risk of climate change becoming unmanageable, irreversible, and catastrophic. Yet globally our carbon emissions continue to rise. The strike on Friday was a call for the UK government, and governments around the world, to respond to climate change as a genuine emergency. This a moral imperative for ourselves, for the planet, and for our children.” – Tom Gillhespy, Principal Consultant

“I joined the climate strike because this is the defining issue of our time and because our failure to arrest, and reverse, the manmade warming of our planet would represent the genocide of future generations.” – Chris Perry, Principal Consultant 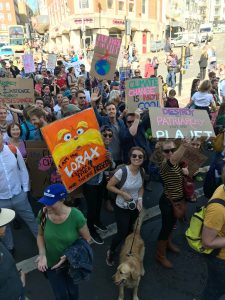 “I decided to strike because the planet has already warmed by around 1C over the past century, fuelling sea level rises, heatwaves, storms and the decline of vulnerable ecosystems such as coral reefs. These things are happening now and they are getting worse. We are not helping by perpetuating a system where the environment is treated as an externality- everybody’s resource and nobody’s responsibility. The strike was my opportunity to signal to governments around the world the need to acknowledge our system is broken, and do something to change it.” Alex Cornelius, Senior Consultant

“I have supported action on climate since carrying a lifeboat to the 2001 UN Kyoto Protocol negotiations in Bonn.  Back then, most of my (lawyer) colleagues thought I was a weirdo for doing so. I really empathise with the placard I saw on the Brighton march ‘Can’t believe I am still protesting this s**t’.  Hope I am still not marching when I am a pensioner.” Jon Cooper, Partner

“I joined to show solidarity with the school strikers and amplify their message that we urgently need climate action now. 2050 is too long to wait for a net-zero carbon economy – we need a Green New Deal with a commitment to net-zero carbon by 2030.” Alex Scales, Business Development Officer

“I joined because I feel useless and this makes me feel part of something positive! We have to show them that we care and it motivates me to do more. It stokes a feeling of anger which is a useful motivation to change my own behaviour!” Eve MacKinnon, Senior Consultant

“I decided to strike as I felt it is crucial that we stand in solidarity with young people who are going to be the most affected by climate change and also to show the government that they can’t ignore us!” Becka Kindler, Research Analyst

“Projections of the impact of climate change have been too long ignored, with the burden of responsibility for carbon emissions weighing heavily on the shoulders of big business and governments. I marched on Friday to call on those in power to recognise the collective responsibility we all have, and rapidly move to climate action.” Joe Thompson, Consultant

“I was so impressed by the turnout of young people, from babies to teenagers,  I wasn’t politically active at that age. I hope they continue to be active, both on climate action and other important environmental social issues. I will continue to march behind them.” Jessica Rust-Smith, Consultant 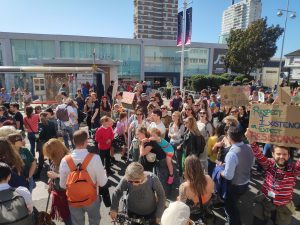 “It’s very easy to feel overwhelmed by the state of the world, like you don’t have any control over your life, and that you can’t do anything to make a difference. Taking part in the global climate strike was, in some part, a way to take back control of my life and change those narratives—to remind myself that all is not lost and that I can make a difference.” David Kim, Project Officer

“We can all make small changes at a personal level and those changes are really important, but until big corporations and whole countries make changes too, our individual efforts are like a drop in the ocean. Real systemic change is needed from our governments to transform big businesses’ attitude to this planet, and it doesn’t seem as though our government is listening to what is important to us. Shouting about it helped me feel as though at least I’ve TRIED to make them listen.” Georgie Kane, Project Manager

“Climate change is one of the defining issues of our times and we need to act as fast as we can to save our planet and the generations to come. I joined the strike to keep the pressure on world leaders to commit to put an end to fossil fuels and take urgent action to halt the climate crisis. There’s a lot of other reasons to join this day of action which also relate to Itad’s work, including demanding climate justice, protecting biodiversity, as well as representing those who cannot take part in the strike for different reasons.” Elisa Sandri, Consultant

“I joined the strike to express my frustration with the British government and others in taking this seriously and to be part of a larger group that feels concerned. Joining the march has, in turn, raised my own consciousness about the seriousness of the situation.” Katharina Welle, Principal Consultant 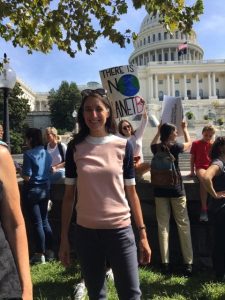 “I joined the strike because people must realise that climate change is not only about polar bears. Climate change is already affecting people: extreme weather events are already happening and destroying people’s lives, as well as the existence of entire ecosystems. At the moment, those who want to affect change individually are left with the overwhelming task of checking the supply chain of everything they eat, buy and consume, and of finding decent and fair alternatives to what the system and the mainstream market offer to them – I joined the strike because I want the system to change and I want everybody’s home to be safe.” Giovanna Voltolina, Research Analyst

“As citizens in a democracy, and the fifth richest country in the world – one that has contributed more than most to climate change – we have a responsibility to use our power and voice.” Simon Lee, Principal Consultant